Erected in Normandy, in one of the most beautiful bays in the world, the rock dedicated to the archangel Saint Michael stands 157m above sea level. One of the first ever pilgrimage sites in Christendom, protected as a UNESCO World Heritage Site, it is accessible by walking on the sand at low tide, a shuttle, or by taking an elevated dry walkway.

The archangel Saint Michael is said to have come to the Archbishop d’Avranches three times in his dream, asking him to build a church on top of the rock. The construction of the abbey started in the 10th century and the pilgrimage to Mount Saint-Michel was at its most popular in the 12th century. Many kings came to kneel here seeking absolution, but its golden age was soon followed by a period of high drama, fire, devastation and finally, the abbey was turned into a prison during the French Revolution. In 1969, the religious community came back to reside permanently on the Mont-Saint-Michel.

With deep blue to pale grey skies, surrounded by sea or sand at low tide, the ever-changing light on the Mont-Saint-Michel is a sight to admire at least once in a lifetime. In days of old, pilgrims used to risk their lives to reach the rock, getting stuck in sand or drowning when they were caught by the high tide. Like the Hebrews crossing the desert, braving the sea to get there was a spiritual journey and an act of faith. Today, guides can take you there safely at low tide on a 3 to 14 km walk. Alternatively, you can choose the elevated footpath or shuttle service. Once you reach the rock, the climb takes you past medieval houses, up to the black granite abbey 157m above sea level. On the way back down, you can treat yourself to a traditional omelet at La Mère Poulard, the most famous restaurant on the rock for 130 years.

The archangel Saint Michael is the champion of souls, ushering them into Heaven. Pilgrims make the journey to Mont Saint-Michel to pray for their salvation, penitence or to ask for the protection of the deceased. 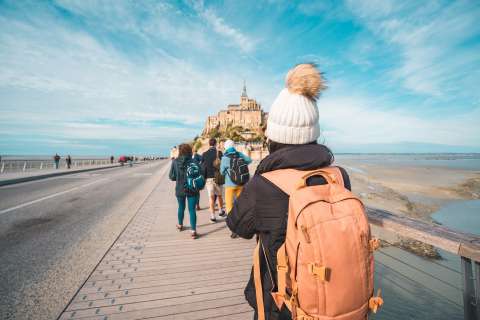 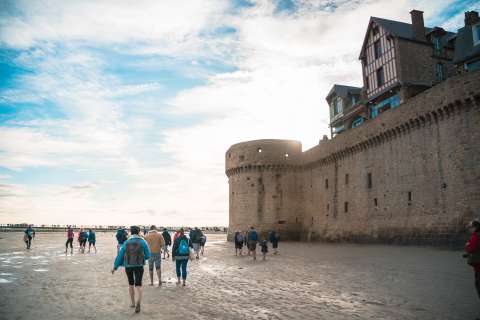 The Scriptures’ Museum
Discover the history of Mont-Saint-Michel through, amongst other displays, an exhibition of precious manuscripts made by the copyist monks.

The American Cemetery of Monjoie Saint-Martin
To pay homage to the 4410 American soldiers who lost their lives on the Normandy beaches on June 6th 1944.

Jumpers Made in France
Visit the Saint James factory in Saint-James. Originally made with the wool of the sheep of the Mont-Saint-Michel bay, they are famous for the stripy “marinière” jumpers.

Leisure activities
There are so many sporting activities to enjoy alone, or with the family such as canoeing on the river Sélune, mountain biking on 270 km of tracks in the Val de Sée, hiking to the waterfalls in the mountains of the Mont-Saint-Michel bay… 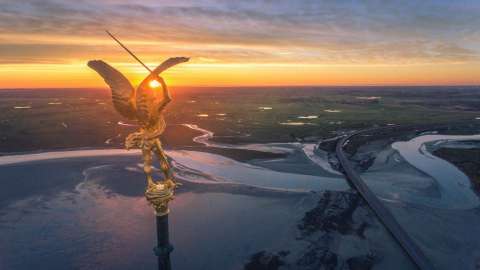 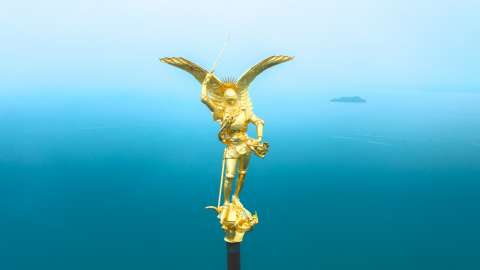 Crossing the bay on foot
A 3-hour pilgrimage, walking on sand to reach the abbey in time for mass with a group of pilgrims.

Via Aeterna Music Festival
A week-long festival of classical and sacred music held in prestigious locations in and around Le Mont-Saint-Michel. 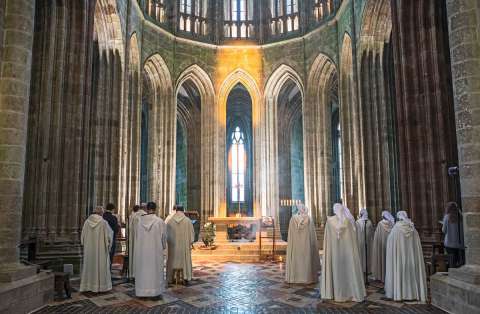 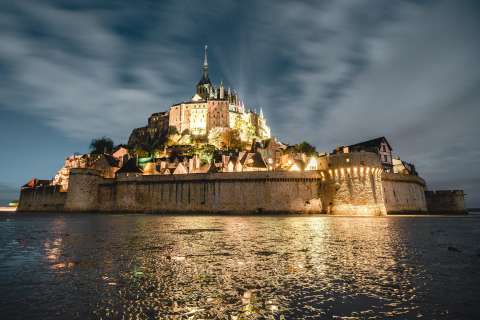