A highly spiritual place in Brittany

A few km from the shores of Brittany, Sainte-Anne-d’Auray is a highly spiritual place where Saint Anne, grandmother of Christ, is said to have made her only earthly appearance. This miracle prompted the start of a great pilgrimage, which has included the likes of Napoléon III, Général de Gaulle and Pope John-Paul II.

Saint Anne, mother of the Blessed Virgin Mary, is the patron saint of Brittany. Worshipping St Anne was already happening here in the 6th century as ancient texts mention a chapel in the hamlet of Keranna, ‘Ker Anna’ meaning village of Anna in the Breton dialect.

Saint Anne appeared in Keranna in 1624 to a young farmer named Yvon Nicolazic, asking to rebuild the chapel where she was once worshipped. She visited him again several times and led him to a wooden statue that marked the place where the new chapel had to be erected. Yvon Nicolazic built a first chapel on that spot but it was destroyed during the French Revolution.

Hundreds of miracles were recorded here between 1633 and 1684. The actual basilica seen today was built in the second half of the 19th century to welcome the ever-growing number of pilgrims and worshippers. 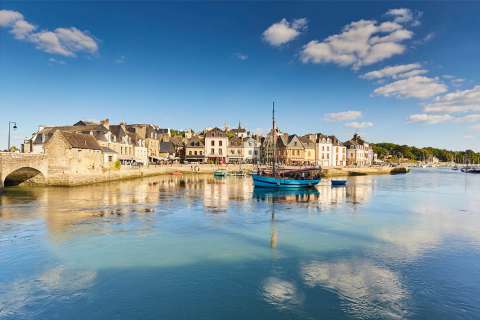 Port of Saint-Goustan in Auray
© A. Lamoureux 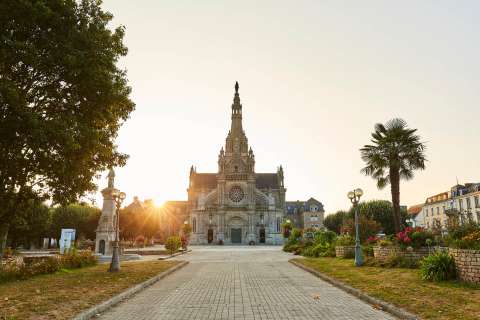 Situated a few km from the beautiful shores of the Gulf of Morbihan and the Bay of Quiberon, this part of Brittany still displays impressive remains of its prehistoric past, including the Neolithic Stones of Carnac. These 3,000 standing granite stones make it the largest collection in the world.

Sainte-Anne-d’Auray is a major pilgrimage site erected 6 km from Aubray, a picture-perfect fishing village with timbered houses and a small harbour where Benjamin Franklin landed to ask help from France in the American War of Independence.

The neo-Gothic basilica was built between 1866 and 1872 at the exact place where Yvon Nicolazic, led by Saint Anne, found the wooden statue. The sanctuary is surrounded by a 7-hectare park with large trees, perfect for a peaceful stroll, fountains and an impressive monument dedicated to the fallen soldiers of WW1.

Sainte-Anne-d’Auray is the spiritual capital of Brittany where Saint Anne made her only appearance on Earth. People gather here to listen to the message of love, to pray for the protection of loved ones or to start a family. Every summer, the Great Pardon of Saint Anne is the largest pilgrimage in the region. Many families come together to the Sanctuary to share their faith. 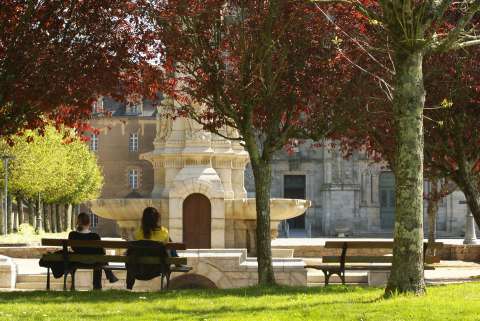 The park in the Sanctuary
© Xavier Hape 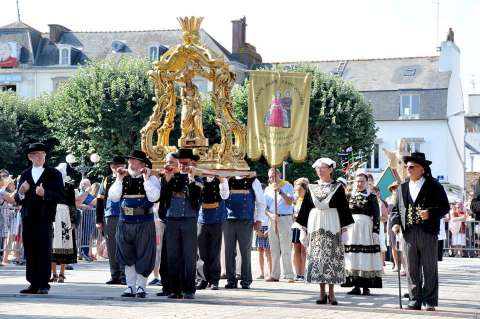 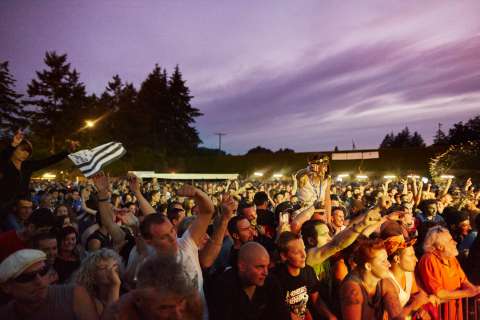 The Basilica
Dedicated to Saint Anne, grandmother of Christ, the basilica is at the heart of the Sanctuary. The bells can be heard for miles, showing the way to the thousands of pilgrims. It holds many treasures within its walls, including relics from Pope John-Paul II and from Saint Anne herself. Discover also the tomb of Yvon Nicolazic, as well as the majestic sounds of a Cavaillé Coll organ.

The cloister
Hidden away behind the basilica, for a moment of quiet reflection or a visit of the gallery holding the Music and Sacred Art Academy as well as temporary exhibitions.

The Sanctuary park
Seven hectares to leisurely stroll through, or sit near the fountain where Saint Anne first appeared.

Yvon Nicolazic’s house
200m from the basilica, the house where the messenger of Saint Anne lived with his family. Destroyed by a fire, it was rebuilt in 1907 in the traditional Breton style and includes the period furniture of a 17th century cottage.

The small town of Auray and the harbour of Saint-Goustan
Six km from the sanctuary, the medieval town of Auray has it all: a charming harbour, narrow streets with artist studios, old timbered houses, a pretty 13th century stone bridge, shady terraces and restaurants… 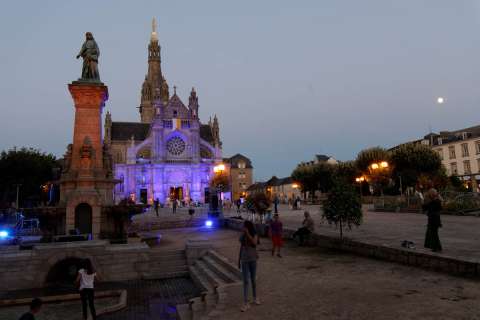 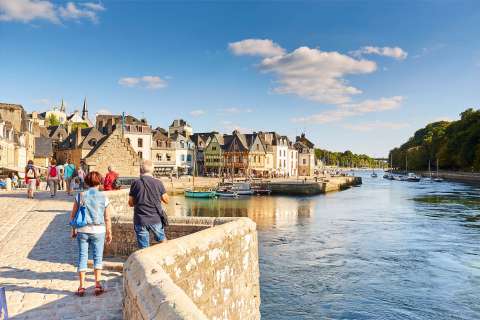 Pilgrimage to Saint-Anne-d'Auray
The experience of the greatest pilgrimage in Brittany with traditional costumes. Processions during the day or at night filled with candle lights.

Sound and light show: 1625, the Mystery of Saint Anne
The story of the sanctuary, from the appearances of Saint Anne to the visit of a Queen of England, Pope John-Paul II, the first pilgrims… 200 people take part in the outdoor event.

Festival des Galettes du Monde
Pancake Festival of the local specialty with food, music, arts and crafts from across the globe. 20 000 people take part in this gourmet and fun week-end. 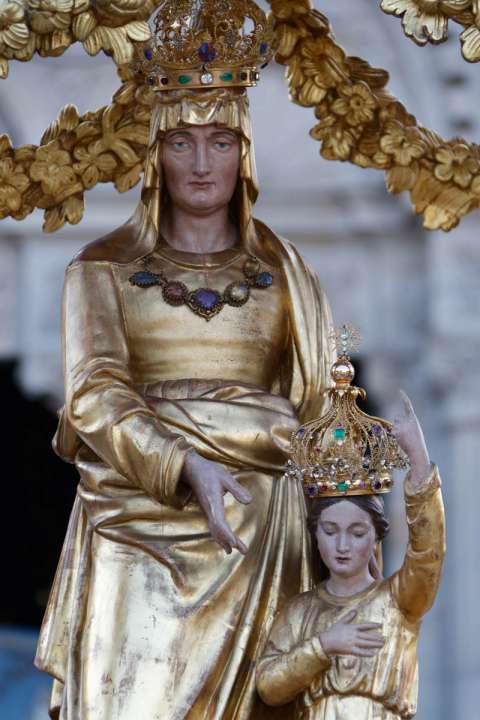