Where nature and spirituality meet

At the foothills of the Vosges mountain range in Alsace, the story of Our Lady of Thierenbach began in the 12th century. A young nobleman, thinking he was dying, offered to give up all his possessions in exchange for his life. When his health improved, he became a monk and urged the clergy to build a priory for the Blessed Virgin Mary to perform miracles.

Around the year 730, Benedictine monks from Ireland and Scotland, seduced by the beauty of the area, decided to settle at Thierenbach. The village was first mentioned in 1284 and it most probably takes its name from the nearby Thierbach stream.

The first miracle happened in the 12th century when the young nobleman from Soultz, facing imminent death from an incurable illness, begged the Blessed Virgin Mary to spare his life in exchange for his wealth. After his recovery, he became a monk and convinced the Cluny abbot to build a priory so that Our Lady could be worshipped and perform miracles.

The priory was founded in 1130. At the same time, the reputation of the vineyards of Guebwiller was growing in popularity. Burnt down in 1276 and then pillaged in 1525, the priory of Thierenbach seems to always rise again from its ashes. 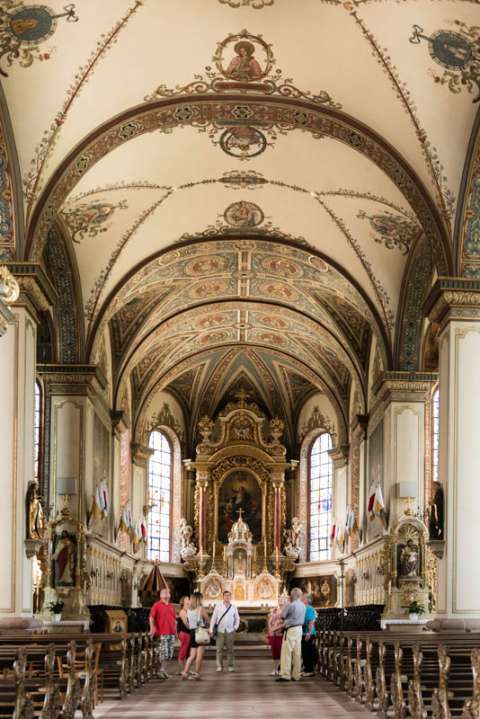 Once inside, the white walls, gilds and paintings are in total contrast with the sobriety of the external walls. In the north apse, on the altar of compassion, a 15th century Pietà invites visitors to open their hearts. 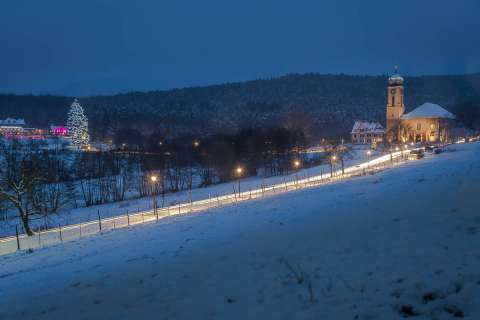 Around 150,000 people gather every year at the sanctuary of Our Lady of Thierenbach, either to pray or to reflect in the peaceful atmosphere of the basilica.

Pilgrims here pays homage to Our Lady, who in 1125, interceded to cure a young man. The 850 or so ex-votos covering the walls are moving testimonies and grateful offerings of recognition for many healings. The oldest is dated from the 17th century. A 15th century Pietà has welcomed generations of believers who come to seek strength, courage, consolation and intercession from the Blessed Virgin Mary in the future. 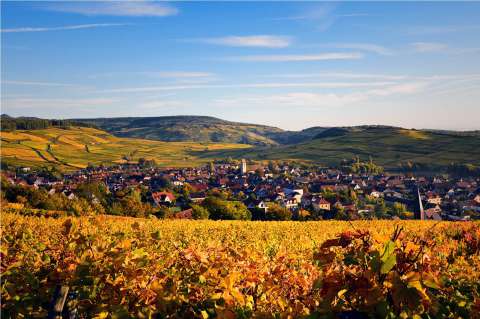 Skiing and snowshoe walking in Markstein and the Grand Ballon
A breath of fresh mountain air with 40 km of green to black skiing slopes ranging between 1150m et 1343m altitude.

A visit to a winery to taste the famous vins d’Alsace
Ollwiller, Saering, Kitterlé, Kessler, Spiegel, Pfingstberg, Zinnkoepflé are the 7 grands crus from the region of Guebwiller. The vines are planted between 200 and 400m in altitude, in a dry and warm climate giving the Alsace wines their distinctive dry and fruity taste.

Mountain biking on the tracks of Enduro world champion Jérôme Clémentz
Winner of the first Enduro World series championship in 2013, Jérôme trains tirelessly in the beautiful scenery of the Guebwiller region. Why don’t you have a go?

Try the local cuisine in a typical farm inn
A traditional ‘repas marcaire’ was prepared literally for “the one that milks the cows”. Today, hikers and visitors alike can enjoy this traditional meal made from fresh produce off the farm. It generally consists of a soup, followed by ‘Roïgabrageldi’ ,a patato and onion specialty with smoked pork. Then some local Munster cheese or ‘bargkass’ and a slice of blueberry tart.

The Alsace Eco-Museum
A replica of a late 19th Century and early 20th century village of Alsace on 100 hectares, with 70 buildings and 40,000 period objects.

The Romanesque Abbey of Murbach
Built in the 12th century, only the choir and the transept remain. Its original nave was dismantled in the 17th century. This remarkable building boasts two pink stone towers and a 19m high Roman vault.

Hiking to Le Grand Ballon
Le Grand Ballon is the highest mountain in the Vosges range at 1424m above sea level. With hundreds of marked trails and beautiful panoramas, it is great both in summer and winter, on foot or by bike as well as for horse riding and snowshoeing. 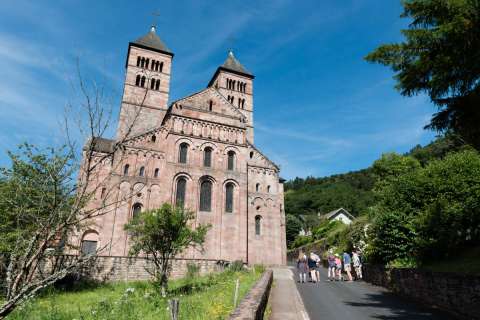 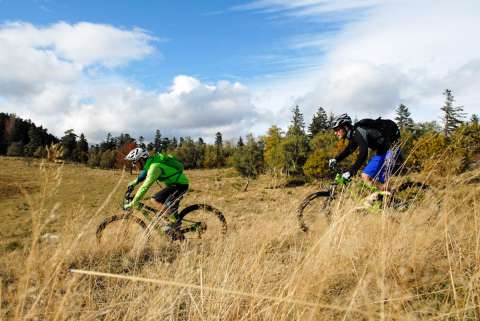 Guebwiller Wine Fair
Taste around 200 different wines from the area. A yearly festival with concerts, children’s entertainment and food market.

Summer zen attitude in Guebwiller
In the old Dominican convent, take some time off for yourself: meditation, concerts, films…all centered around your well-being.

To find out more about what to do and where to stay in Thierenbach:
https://www.tourisme-guebwiller.fr/en/